Google and Facebook are known as the “duopoly” of online advertising. And not for nothing. Last year (in the before times), eMarketer estimated the two would have a combined 61% share of digital ad spend by the end of 2021.

So it was more a matter of if, not when, that regulators, the Justice Department and stage AGS would take a swing or two at breaking the duopoly down into manageable pieces. A month ago, Justice went after Google, claiming it holds illegal monopolies in search and search advertising. And now the Federal Trade Commission has joined forces with 46 states to try and break up Facebook. Their focus is on forcing the social media giant to spin off Instagram and WhatsApp.

A Thousand Davids for Every Goliath

Yet amid all the talk of the pair’s dominance, new companies keep coming along with dreams of finding the giants’ weaknesses and exploiting them. So far, the ambitions are great. And they are usually cast in noble terms. Privacy and data protection, less toxic content, and so on.

The latest of these, primarily targeting Google, is You.com. Launched by former Salesforce chief scientist Richard Socher, You.com wants to compete with Google as a “trusted search engine.”

Socher told TechCrunch the following. “We want to work on having more click trust and less clickbait on the internet.”

We took a look at the You.com website for clues as to how the site will differentiate itself from Google.

The Einstein Behind Einstein

There is no doubt Socher is an impressive figure. He was the guy behind Salesforce’s Einstein AI platform. His practical and academic background gives him real cred as a deep learning nerd. He was a Ph.D. candidate at Stanford.

According to his LinkedIn profile, he left Salesforce in August. While we can assume he was formulating this project before he left, it’s still early days for You.com. And for now, there is no there there, other than a waitlist, which prompts a survey that is very revealing about what challenges You.com is trying to solve.

For example, the survey asks several questions about trust. Do we trust search results? Which sources of information online are the most trusted? The survey also really wants to know about how we make decisions about buying products online, and if we spend more time on shopping decisions under $500 vs those costing more than $500.

Here are a couple of screenshots from the survey. 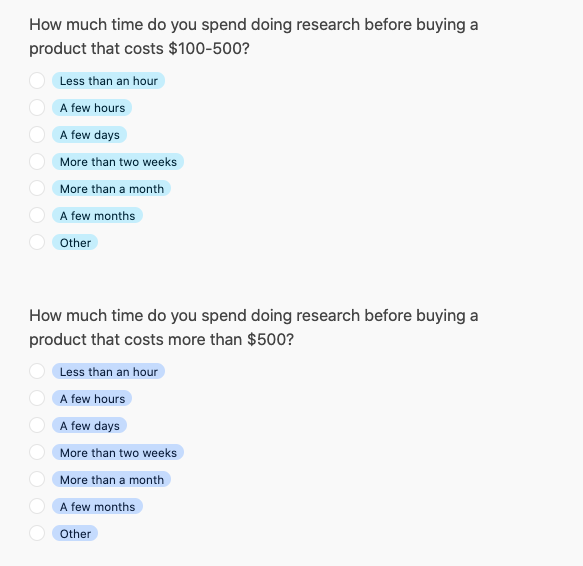 Most of the product priorities implied in the survey are also summarized on the home page. What Socher seems to be promising is a search engine that does a better job of serving up trusted content, whether it’s a search or a shopping experience.

“The Internet is full of amazing and useful information but also junk, fake reviews, biases and unhelpful ads. You.com developed Artificial Intelligence that helps you sift through it all by providing you CliffsNotes® for the internet. Our AI provides helpful summaries for any query, allowing you to see different points of view.”

“You.com helps you find what you’re looking for faster than ever. We prioritize real results over paid content and ads to ensure that you can trust the integrity of our results. A whole new interface will allow you to get to the content you seek faster and build your own curated knowledge base.”

And finally, the part about online shopping.

“Tired of researching dozens of sites when making a complex or expensive purchase? You.com summarizes the research for you – without the fake reviews. You.com provides trustworthy reviews from real users and experts, pros and cons and more – saving you time and money.”

You.com’s emergence led us to check in on Neeva. That is the privacy-friendly, personalized search app that plans to compete with Google via a subscription model rather than advertising. We wrote about Neeva over the summer. Founded by former Google ads chief Sridhar Ramaswamy, the company had raised $37.5 million (and perhaps more since?) from big names like Sequoia Capital and LinkedIn vet Reid Hoffman. He’s also assembled a team that includes, according to Neeva’s website, veterans of Google, Snap, Dropbox, and WhatsApp.

Today, five months after we wrote about Neeva, the company’s website still features a button accepting people onto its waitlist. They haven’t generated much press, or any that we can find, since a round of stories over the summer.

Neeva’s bet, which doesn’t seem to have changed, is that users will pay a monthly fee for search that is personalized and doesn’t turn you, the user, into the product. To us, this feels like a niche play. We don’t see it as the David that finally fells the Google Goliath. But it could be a lucrative niche.

First, Sridhar and the team need to launch the product. In fairness, they are clearly working on it. I have signed up to be a product tester for Neeva and have an onboarding session scheduled for a week from now. They seem to be taking a slow-and-steady-wins-the-race approach to slaying the giant.

Will You.com Be Different?

It’s easy to wave off any effort to take on Google (or Facebook, or Amazon) as a fool’s errand. Yet, as we enter an era where antitrust regulators appear to be serious about breaking up big tech, this may be a good time to come into the market with something new and better.

One big question is whether investors will be willing to make big enough bets on the You.com’s and Neeva’s of the world to give them a legitimate shot.

Of course, Quibi and many a failed political campaign have proven that sufficient funding can’t overcome a bad product or poor execution. But insufficient funding can also doom a good idea to failure. We think Neeva will need a lot more than $37.5 million to win, even as a niche play. For now, lets’ assume Neeva’s backers are good for more dough. We still don’t know how much cash is behind You.com. But we do know that it is backed by Salesforce CEO Marc Benioff and VC Jim Breyer. So perhaps money won’t be an issue there either.

As we often say here at Localogy Insider, let’s wait and see what happens.