We’ve recently been having conversations about remote work with leaders across the Localogy ecosystem. We’ve talked about how the sudden shift to work from home has impacted their businesses, and what they believe will be the longer-term impacts of this sudden shift away from an office-based workplace.

A few core notions emerged from these conversations.

The first is that things will not be exactly as they were. Whatever the post-pandemic normal is, things will not look exactly as they did before. The second is that there will be no one-size-fits-all post-pandemic workplace model. But remote will become a larger component at a minimum.  A third theme involves sales and customer relationships. Interactions that once had sufficient value to merit a face to face visit will now be handled remotely. Not because of health concerns necessarily. The clients will simply prefer it.

Restaurant booking and loyalty startup Seated has raised a $30 million post-seed round led by Insight Partners and Craft Ventures with participation from Greycroft and Rho Capital Partners. The company rewards restaurant patrons with gift-card credits from Amazon, Nike, Sephora and other top brands.

Chinese HR software startup Moka has raised a $14.4 million Series B extension from unnamed investors, bringing its total B round to $43.2 million. The company’s software helps small businesses or HR managers streamline all employee-based workflows including recruiting/hiring, comp and staff management.

Who Misses the Office?

While there is ample data showing a majority of office workers would rather just keep working from home when this is all over, that view is far from universal.

A recent Gallup survey, for example, found that 59% of office workers forced to WFH by the pandemic would prefer to keep doing so after the crisis fades.

That’s a convincing majority who want indefinite WFH. But that 41% who would like to go back to the office is too big a cohort to ignore. We suspect many in that latter group are younger workers who miss the social aspects of work. Or their work from home configurations are less than ideal. Tiny apartments. Too many roommates. You get the picture.

James Ciuffetelli is a former GM sales and executive GM digital at Sensis, Australia’s leading local search company. Today he consults companies on digital transformation. James recently weighed in on the shift to virtual work in a LinkedIn post. 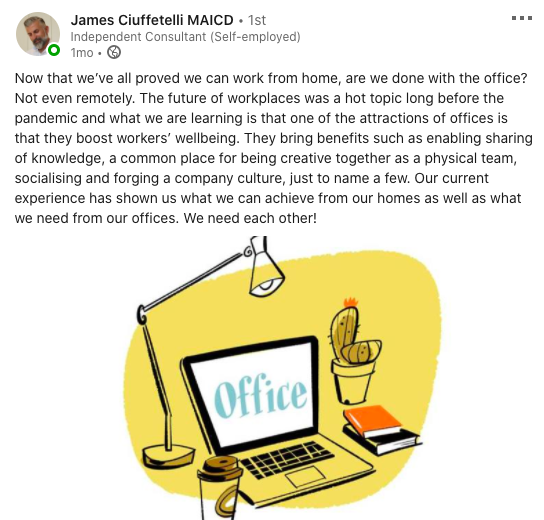 We followed up with James to discuss his comments further.

He does believe COVID has changed work forever. But he also believes the office still has value, in particular as a place to learn from and collaborate with peers.

“I think we’ve got to find a balance. People intrinsically need connection. Realistically, I learned the most, not from the degrees I received, but from peers, from colleagues at work, and the customers that we served.”

While many leaders, particularly in tech, have embraced WFH, there is no shortage of detractors.

One such detractor is Reed Hastings. The Netflix chief had nothing good to say about remote work in a recent Wall Street Journal interview. “No. I don’t see any positives,” he told the Journal. “Not being able to get together in person, particularly internationally, is a pure negative.”

That said, even Hastings will not require Netflix’s 8,600 employees to return to the office until there is a vaccine.

In our conversation with James Ciuffetelli, he agreed that sales and customer support will change because of the habits we’ve formed during this forced WFH experiment.

“Some clients are going to want to meet on Zoom at 7 at night because that’s when they’re doing their paperwork. And then we’ve got this technology that we know works,” James said. “So I actually think the way we manage organizations has fundamentally shifted. But I think service is still at the forefront and it’s not just about human service, right? It’s about the way you put your proposition forward in whatever channel and at whatever moment in time.”

Can’t We Just Zoom It?

Wayne Bischoff is CEO of Mediamark, a radio and digital audio sales agency based in Johannesburg. South Africa had imposed one of the world’s strictest lockdowns beginning in March. The country is now at level two in a five-stage re-opening plan.

In a recent conversation, he said his company has become far more efficient during the crisis. He also said that, contrary to logic, the shift to WFH has actually broken down silos and brought his team closer together. A key reason for this is that now every unit of the organization participates in online meetings that might have otherwise been a series of impromptu hallway 1:1 conversations.

One permanent change Wayne is certain will take place is the number of face to face customer meetings will decline. And this, he believes, is a change that his customer will welcome.

“A few customers have told me, ‘Look I love you guys, but often I don’t have time to see you. I am looking at my watch the whole time. Now, it’s a quick 30-minute session.’,” Wayne explained.  “They enjoy it a lot more. Going forward, we will get pushback. ‘I know you want to see me but I am really busy. Let’s do it online.’ It has changed the way we operate.”

From ‘Digital First’ to ‘Remote First’

Matchcraft CEO Sandy Lohr said her company was a remote-office hybrid before the pandemic. While the company will eventually re-open its offices, the cultural balance has permanently shifted in the direction of remote work.

“You know, we used to say, ‘Think digital-first’. Now we think remote first. And that’s just the new mantra. Now our mode of operation has to be thinking virtual. I think that is the new norm,” Sandy told Localogy.

Sandy sees a fairly complicated post-pandemic dynamic. Remote work will be the norm, but Matchcraft, which has employees all over the world, will need to accommodate those with less than ideal WFH setups.

“Sure we’ll have our office. But I don’t think it’ll be used the same way that it used to be,” Sandy said.  “But not everybody has a good work from home setting. And we’ve got the office for them. So hopefully, someday we’ll be able to use that again.”

Stay tuned for more content from Localogy on the work-from-home phenomenon.